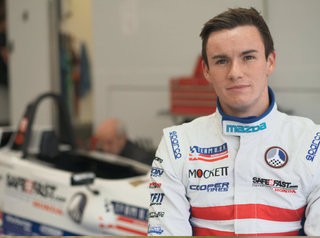 The distinctive red-white-and-blue rays of Kirkwood's No. 22 car lined-up on the grid in 16th position after finishing eighth in the Semi Final race earlier that afternoon.

Kirkwood embroiled himself in a fraught battle in the midst of the 30-car field. He lost a place in the early stages before finding his feet and making a series of strong passes, especially under braking for Clearways, before finally crossing the finish line in seventh.

“Overall the race was good,” said Kirkwood. “I just had to pick people off left and right. After a couple of laps it almost seemed like you had to get the car in front of you comfortable with you in their mirrors and then make a move on them when they left the door open.”

On Saturday, Kirkwood competed in qualifying and a heat race.

The 66-car field was divided into three heat races with Kirkwood, who qualified fifth for the heat earlier in the afternoon, competing in Heat Three.

The start of the heat was troublesome for Kirkwood as he fell from fifth to eighth on the opening lap, but as he gained experience behind the wheel, he started to push harder and soon began to look for a way to make some passes.

Overtaking was not easy on the tortuous Brands Hatch Indy circuit, but Kirkwood neatly outbraked Portugal’s Pedro Matos for seventh place at Clearways, then repeated the maneuver on Tom McArthur on Lap 10 to ensure a sixth-place finish which would qualify him to run in the Semi Final race Sunday.

“The racing’s nothing like anything else I’ve done before, I have to say, and throughout that race everyone was a bit erratic,” related Kirkwood. “The thing is, they’re erratic but they’re under control, so you kind of have to be erratic also, which is not something I’m used to, so after about five or six laps I got the hang of it and started driving a little bit more crazy, you could say, and came away with a good finish.”

Kirkwood will return to action for the Walter Hayes Trophy at Silverstone on November 5-6.

Complete scoring, photos, videos and personal blogs from Kirkwood can be found at TeamUSAScholarship.org