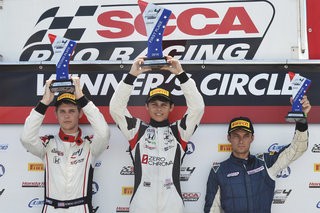 Cameron Das of Brooklandville, Maryland, stole the show claiming a pair of victories in Races 2 and 3 as the Formula 4 United States Championship mid-season event came to a close at New Jersey Motorsports Park on Sunday.

“It feels amazing to come in so quick and do well through the entire weekend,” Das said. “It shows that the hard work in the beginning really pays off in the end.”

Das would only be passed once during both 30-minute race sessions by Moises de la Vara of Guadalajara, Mexico. Das quickly regained the lead from de la Vara after one turn.

Konrad Czaczyk of Loxahatchee, Florida, who swept the inaugural weekend of F4 U.S. events in July before a pair of 10th-place finishes earlier this month, found himself back on the podium, finishing second in the weekend finale events.

“I tried chasing down Cameron toward the end of the race,” Czaczyk said. “Unfortunately, we weren’t able to catch him today. He was just a little too fast this weekend.”

Series newcomer Skylar Robinson of Augusta, Georgia, crossed the finish line back-to-back times in third position. Robinson’s battle for third during Race 3 was alleviated once the safety car was called to the track for a single-file restart after a full track double yellow. Robinson was able to jump the start, find his racing line and pull away from the back of the pack.

Double yellows were thrown halfway through the final event of the day after Darren Keane of Boca Raton, Florida, took a wild ride off of Turn 1. After crossing the start finish line during lap seven, first-time F4 U.S. Championship event entrant Quinlan Lall of Ringwood, New Jersey, tried to make a run on Keane late in the front straight to overtake fourth-place position. The two competitors connected tires midway through the turn and Keane’s car went off-track, rolling two times through the air. Keane emerged from the car unhurt but was unable to return to the race. Lall’s No. 3 car skidded into the dirt off-track but continued the race.

“I radioed to everyone that I was just fine after sitting there with my eyes closed for a minute,” Keane said. “I want to thank Crawford Composites, Honda, SCCA Pro Racing and the FIA for making such a safe car. I walked away without a scratch on me and I can’t wait to get back in the car to make a podium run at Road Atlanta.”

F4 U.S. Championship points leader Kyle Kirkwood of Jupiter, Florida, had a rough second day of racing. Kirkwood started fourth on the grid during Race 2, but after braking issues lost momentum throughout the race and finished in 11th place. During Race 3, Kirkwood’s brake problems were resolved. Starting in 14th position, Kirkwood made his way through the pack, chipping away at his competition. Kirkwood made his way to fourth, challenging Robinson for podium position. Kirkwood’s charge ended after incidental contact around a turn caused a flat rear tire. He retired to the pits for a quick change and continued the race.

The F4 U.S competitors return to action for their fourth event of the season Sept. 17-18 at Road Atlanta in Atlanta.