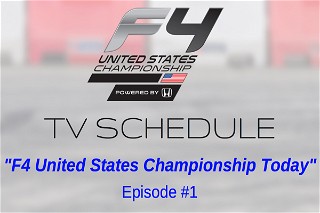 INDIANAPOLIS – The inaugural race weekend of the Formula 4 United States Championship powered by Honda will be featured on television across the country starting this weekend.

The first of seven episodes of “F4 U.S. Championship Today” will air Saturday at 4 p.m. ET on Altitude Sports Network (ASN) and will debut on NESN National on Monday at 12:30 a.m. ET. The episode will feature the debut weekend of the series from Lexington, Ohio, earlier this month.

ASN and NESN are available throughout the United States on DirecTV, Dish Network and AT&T U-verse, making the program available in millions of households. The program will also air on regional sports channel SWX Sports.

The show will also air on national cable and broadcast networks MAV TV, Rev'n TV, and The Action Channel, formerly Tuff TV.  More airdates and times will be added at a later date.

The first show, which is produced and distributed by Carolina Production Group of Matthews, North Carolina hosted by award-winning motorsports broadcaster Rick Benjamin, follows the F4 U.S. season debut at Mid-Ohio Sports Car Course with highlights from each of the three races, interviews from drivers and team owners like five-time IndyCar winner turned television color analyst Scott Goodyear and insights on the making of the car.

Here’s the broadcast schedule for the first episode, which is subject to change: