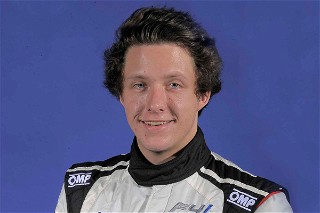 Racing isn’t always about the adrenalin rush of going top speeds, the accomplishment of taking the checkered flag or the glistening of trophies lined handle-to-handle in a case. Sometimes racing is about bringing awareness to a social movement of self-acceptance. Blake Mount of Littleton, Colorado is executing this every time he puts on his helmet.

In a subtle, teal mat finish casted on a black, glossy background, Mount wears the serotonin chemical compound make-up on his helmet with the phrase Carpe Diem, seize the day, painted on the back.

Mount, 21, was diagnosed with depression as a teenager. His body does not naturally produce the chemical serotonin which is responsible for mood, appetite, sleep, memory, learning and several other bodily functions. ­­­­­­­­­­­­­Before Mount was diagnosed, he lost the desire to do the things he once loved. One of those passions being racing.

“There was a period where I didn’t race,” said Mount. “It was easy to get lost, unmotivated, feeling sorry for myself. I worked really hard to get past that and manage my disease. I needed to learn about the world and find myself.”

Mount worked hard coping with his diagnosis by doing activities that gave him an outlet like art , gaming and photography, but his heart led him back to racing.

“I never experienced true happiness until I was on that open track.” Mount said. “My mind went blank, I had this hyper-focus that caused an unconscious grin, I was calm and I knew this is where I belonged.”

Mount had a support system in his parents and other close friends and family members around him to help guide him the right direction, but after going through his hardship there was something unsettling that stuck with Mount.

“There’s this taboo stigma that surrounds mental disease- like we’re not supposed to talk about it. That’s so silly because talking about it makes things a little easier.” Mount said. “I want other people, especially teens, to know it’s ok to be yourself. People don’t have to let a disease define them. Depression is always going to be a part of me, but I’m not always going to be depressed.”

Mount aspires to use racing as a platform to spread his message of self-love and acceptance and later start an organization for teens who need assistance with mental disease.

“Everyone has their kinks. I want to help people acknowledge their differences, empower them and turn those kinks into strengths.”

Want to know what famous racer gave Mount advice or his go-to smart phone app? Click here to find out more interesting facts about him.