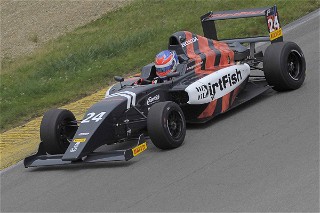 In the first of three races, Cameron Das of Brooklandville, Maryland, was issued a penalty based on SCCA regulations when it should have been based on the regulations of the Federation Internationale de l'Automobile (FIA).

Das made a move on Michael Goodyear of Carmel, Indiana, that ended with Goodyear spinning off track, and Das taking third place on the podium.

SCCA Pro Racing officials concluded after reviewing on-board footage from all fielded cars and speaking with each competitor that Das had forced Goodyear off the track by mistake. Goodyear finished fifth, and Das was issued a penalty following the SCCA penalty guidelines that allowed him to keep his podium position but lose six championship points.

The steward’s penalty was later reviewed by the SCCA Pro Racing CEO and President Derrick Walker over concerns in the differences between the FIA sporting regulations and SCCA penalties. The FIA sporting regulations allow for a time penalty of 8.662 seconds to Das’ total lap time. This put him finishing directly behind Goodyear in fifth, losing his third place podium position. The addition of time also made Das ineligible for prize money and deducted points from his championship run.

“SCCA Pro Racing discussed with the FIA regarding the stewards decision,” Walker said. “While the FIA allows amending the FIA sporting regulations, any such alterations must be published prior to the event. We failed to make our amendments public for the competitors to review before the first race. Since we failed to do that, I felt the only fair thing to do was revert to the FIA sporting regulations as published. I apologize to the drivers and teams affected by our mistake.”

The final results moved Pedersen up to third, Goodyear to four and dropped Das to fifth place. All points and prize money have been updated to reflect the changes.