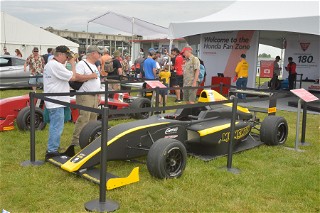 With a record-breaking crowd of 350,000 people on hand for the 100th Indianapolis 500 over the weekend, the Formula 4 U.S. Championship powered by Honda debuted its car to racing fans from around the world.

The Momentum Motorsports F4 car was on display in the center of the Honda Fan Zone in the midway, allowing fans to get an up-close look at the car.

“We spoke with hundreds of people who were very excited about the series and what it represents to karters trying to make it to Formula 1 or IndyCar,” said Phil Picard, Momentum Motorsports team manager. “The F4 U.S. platform makes it much easier for young, talented drivers to find their way into the higher ranks of racing and do it at a more affordable fashion. The fans who stopped by the car seemed to be thrilled about the future of junior open-wheel racing in the United States.”

The F4 U.S. Championship car received a lot of attention from spectators. Race fans huddled around the car taking selfies and photos of the car’s debut.

“This car is pretty cool,” first-time Indy 500 goer Ross Hunter said. “Having all the drivers start with the same base really showcases the driver’s skills.”

To view photos from the car’s debut, click here.