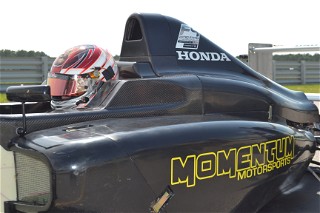 "There was an overwhelming response from interested drivers," Picard said. "So much interest that we are talking about the possibility of holding another test for future contracted drivers. The drivers we selected for the shoot-out, are three great karters who are also great competitors."

Tucker, the youngest of the three drivers at 17, has had a passion to race since his dad took him to his first Indy Grand Prix. Though Tucker has only been racing go-karts for one year, he has been racing bicycles competitively for years.

"Racing bikes is a bit different, but once I got behind the wheel of the F4 car, I felt right at home. It was amazing," Tucker said. "I'm really excited for the opportunity to work with Momentum. Their knowledge and expertise in the field will really help get my career rolling and make me a better driver."

Landi, 19 of Aldrige, New Jersey, was the second driver hoping to earn a spot on the Momentum team. Landi grew up 10 minutes from a local race track. After watching local racers have so much fun on the field, he decided at 13 it was time for him to make the transition from fan-in-the-stands to driver-behind-the-wheel. Landi started his racing career in go-karts and has had some experience on short-tracks racing Legends.

Like Tucker, Landi felt the transition from his kart to the F4 U.S. Championship car was smooth.

"I really got the handling down after a lap," Landi said. "The car was an easy transition from my kart. I just had to handle the wheel a bit slower. Everyone did whatever it took to make this as smooth as possible. The Honda engine was especially great. I really learned a lot and want to thank everyone who made this opportunity possible."

Tyler Guilbeault was the final driver to try and impress his potential future team. At 24, Guilbeault, was the oldest of the three competitors with the most racing experience. Guilbeault grew up at race tracks around the United States, traveling with his father who was a NASCAR mechanic and tire changer. He started his racing career at age 8 in karts and racing open wheel professionally is his dream.

"Getting invited to test in the F4 car is a once in a lifetime deal," Guilbeault said. "I live, eat and breath motorsports. I see a lot of trends come and go. I've got to see up close that this series is not going to be just a trend. The car is relatively inexpensive for the competitor to race and has been a very easy transition from my kart. This should be a real eye-opener in ladder series competition. I can't wait to see this take over."

The drivers weren't the only ones excited to be on the track with the new car. This was the second time Momentum Motorsports was able to see their car in action.

"We are more and more impressed with the car that Crawford Composites built every time out," Picard said. "The learning curve for the drivers was nearly non-existent and each driver took to the car within three laps. The parents were very pleased with the car's looks, its technology and its safety. Overall, we were very pleased with this test, it was a tremendous success. Our excitement is at an all-time high."

The next steps for Momentum will be to review its test footage, talk with the drivers' parents or managers and work out contracts with the competitors they select.

"It's going to be a hard choice because of the talent that each driver showed," Picard said.

Momentum Motorsports' drivers should be selected within the next few days. The F4 U.S. Championship Series debuts at New Jersey Motorsports Park on June 10-12 with two of these three drivers competing for the first-place spot on the podium and the overall points champion as well as some FIA super points.

For more information on the F4 U.S. Championship Series or to see a schedule of events including upcoming tests, visit F4USChamipionship.com. Fans can also follow Momentum Motorsports and each driver's development over the year on their social media platforms listed below.