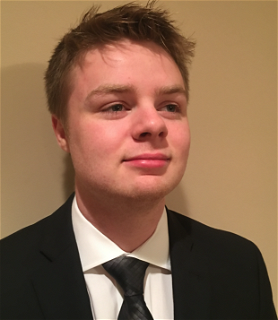 Being the son of five-time IndyCar winner and ESPN on ABC color anaylst Scott Goodyear and grandson of Canadian driver Don Goodyear, some might think that Micheal Goodyear of Carmel, Indiana 's future was already set in perpetual motion to hit pavement in an open-wheel, but Goodyear has a slightly altered plan.

The 19-year-old accounting and economics double-major just finished his sophomore year at Ball State University. His focus is first on his education, then on racing.

“Juggling racing and school can be tough, but school comes first. That’s why we are focusing on racing in the summer rather than in the fall and spring when I’ll be in classes,” said Goodyear. “I really want to drive professionally, but it’s important to me to have a backup plan. In case driving doesn’t work out, I still want to do something I love, and I love accounting.”

“My high school teacher, Mrs. Noll, had such a passion for accounting," said Goodyear. "I took accounting for two years with her and she instilled that passion in me. Those two classes in high school have already paid dividends in my adult life.”

Goodyear's racing career started early. Before most people graduate elementary school, Goodyear started racing. At age 12, he climbed behind his first go-kart. Goodyear quickly rose through his divisions taking multiple poles and winning six karting championships, but having a dad who was a world-famous driver wasn't always easy.

“Early on in my career, when it was a big national race, I always felt the pressure needing to do well. I had to. Everyone knew who my dad was,” Goodyear reminisced of his early race days. “My dad never put that pressure on me though, that was all me, and luckily that pressure has gone away now. Dad never pushed me into racing. I’m sure he hoped for me to race one day, but he let me choose my own path.”

”I’m really excited to compete in the F4 U.S. Championship,” Goodyear said. “My grandpa passed away earlier this year and the last time I talked to him, he asked me if I was going to be racing cars. I got to say yes to that question. That made him proud and it meant a lot to me.”

If fans would like to learn more about Goodyear, like what he’s learning to do over the summer other than racing, the advice he got from an ex-girlfriend and who his celebrity crush is, visit facebook.com/F4USChampionship. Fans can also follow Goodyear's F4 U.S. Championship development on Instagram (@michaelgoodyear).