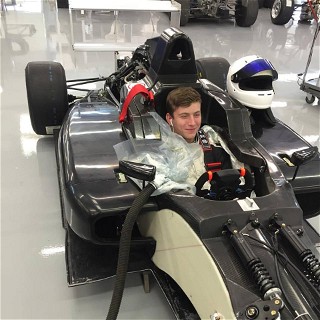 The air was crisp and the pavement dry. The only noise heard for miles, the roar of a Honda motor from a new SCCA Pro Racing Formula 4 United States Championship car piloted by first-year Canadian driver Raphael Forcier racing around Roebling Road Raceway just outside of Bloomingdale, Georgia.

“The car was easy to drive. So smooth,” Forcier said with a smile and eagerness in his voice, “The handling was great. This is going to be a lot of fun.”

Forcier, 16, grew up in Montreal where he got his start in motorsports by racing dirt bikes. He then transitioned into karts, competing in the Eastern Canadian Karting Championship earning top five championship results in points.

He graduated this past winter to the Skip Barber Winter 2015-16 Series. There, in his rookie season, he obtained one feature win at Homestead-Miami Speedway and six podium finishes; landing him fourth in the points standings for the season.

Group-A Racing, a New York-based racing team that owns cars from karting to the F2000 series and also competed on the 2011 season reality show Circuit Battles, drafted Forcier as its driver in April to compete in the #62 Parizeau Pawulski Architects car for the inaugural F4 U.S. Championship season.

“The car has been perfect right out of the Crawford [Composites] factory,” team manager Johnathan Scarallo boasted. “It ran perfectly. We did nothing to it other than change some initial set-ups to learn nuances of the car. Raphael is also doing a fantastic job behind the wheel.”

Today was the first time Group-A Racing has had the opportunity to test the car with a full team. They have two additional days left of testing before the first open practice prior to the season opener in June.

All F4 U.S. Championship cars are manufactured in North America, adding to the affordability of the sport. The F4 U.S. Championship was created by Federation Internationale de l'Automobile (FIA) and sanctioned by SCCA Pro Racing because both parties saw the need for a ladder series where young drivers could transition from karting to Formula 3.

The F4 series was created in 2014 and has flourished since with 12 FIA-approved series around the world. The F4 U.S. Championship is unique because all the competitors’ start with the same Honda motor, Pirelli tires and Crawford Composites chassis, making it truly focused on driver development and competitiveness.

“The series has a lot of good drivers,” Forcier commented. “The racing is going to be exciting!”