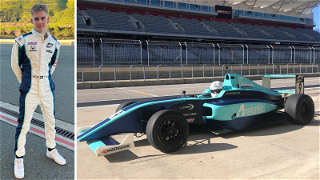 Ahead of his rookie F4 U.S. season, Westling has enjoyed considerable success during an extensive winter testing and driver development program. He finished 2nd in the 2022 F4 West Coast Winter Series championship scoring a pair of second place results at the Auto Club Speedway in suburban Los Angeles in early February. Westling also scored a pair of fourth-place finishes at the Sonoma Raceway event in northern California at the winter series’ final event weekend.

Born in Stockholm, Sweden, the 18-year-old has lived in the suburbs of San Francisco for a decade. Westing is a freshman attending California State Chico University studying Business and Entrepreneurship; and is also an accomplished electric guitarist who was recently featured in a music video.

Jensen team principal Eric Jensen stated, “Oliver is naturally very quick and has also shown impressive consistency finishing all six of his pre-season practice races at circuits located in Miami, Los Angeles and San Francisco. Oliver's driver development program is continuing with additional tests in advance of his first race in the F4 US Championship at the NOLA Motorsports Park circuit in New Orleans on the weekend April 8-10, 2022."

Asked for his thoughts about his upcoming rookie season Westling said, “Thanks first to my parents for allowing me the opportunity to live my dream to take the initial steps to hopefully someday become a professional race car driver. Together with Eric Jensen, we have created a very good driver development plan including considerable testing and practice races at circuits across the United States. The results so far have been encouraging, so I am hopeful to challenge for top rookie honors in my first season racing in the F4 US Championship."

Jensen has a long history with developing young race car drivers, with many former drivers progressing on to paid professional racing careers. For the 2022 racing season, Jensen will operate competing teams in the F4 US and Formula Regional Americas Championships, which are the first two steps in the United States on the Formula One driver development ladder system.

For more details about Oliver Westling and his plans to race in the 2022 F4 US Championship, contact Eric Jensen via email at jensen@jensenga.com