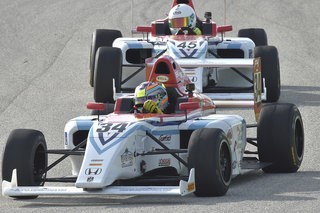 “This season we have five committed drivers that will bring the consistency we needed last year,” said Miller. “Mitch Davis will also return as our crew chief and team manager. The team has been testing and tuning all off-season to continue the momentum we had at the end of the season. By fielding five cars, we can share data and set-up information. With our field growth and the new additions to our team, I have confidence we can win the 2017 team championship.”

Piloting the No. 45 MVL F4 U.S. car, Leguizamon returns to the series for another chance at the $25,000 grand prize. Leguizamon moved from thirteenth to sixth in championship points during the inaugural season finale after capturing two podium finishes.

F4 U.S. veteran Kaszuba will get back behind the red, white and blue No. 34 F4 U.S. car for MVL. During his first F4 U.S. season, Kaszuba earned a podium spot and received the first Crawford Driver Award for his sportsmanship on and off the track.

A. Miller, who competed in the F4 U.S. finale, rounds out the MVL veteran roster in car No. 65.

With a decade of karting experience, J. Miller is one of two rookies joining the team. J. Miller has tested with the team for a full year gaining confidence behind the wheel to compete in car No. 40.

The final MVL seat will be filled by series newcomer Nagel. Nagel joins the team with a successful karting background, wanting to expand his experience to formula cars.