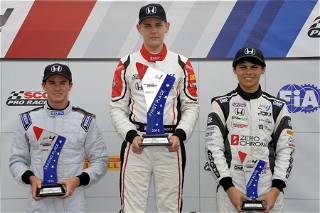 Konrad Czaczyk of Loxahatchee, Florida, made history Saturday as he emerged as the winner of the inaugural race of the Formula 4 United States Championship powered by Honda at Mid-Ohio Sports Car Course in Lexington, Ohio.

Czaczyk, piloting the 47 Leading Edge Grand Prix car, started fifth on the grid and drove his way to the victory in a dramatic move with two laps left in the race. Kyle Kirkwood of Jupiter, Florida, lost momentum going through the keyhole, allowing Czaczyk to move into the lead.

“Coming out of turn one I felt Kyle’s mirrors, and I think that put him under a little bit of pressure,” Czaczyk said. “I noticed he took a strange line out of the keyhole. I told myself that this was my moment, and I needed to capitalize on it.”

Czaczyk had a perfect exit out of the keyhole and stayed behind Kirkwood’s draft until turn seven. Kirkwood came to the inside of Czaczyk to defend his position, but there was only a gap for one car. Czaczyk took the lead, and Kirkwood took second on the podium.

Cameron Das of Brooklandville, Maryland, came in third finishing three thousandths of a second slower than Kirkwood. Das was later issued a penalty after he was contested by Michael Goodyear of Carmel, Indiana.

SCCA Pro Racing officials concluded after reviewing on-board footage from all fielded cars that Das had forced Goodyear off the track. Goodyear finished fifth, and Das was able to keep his podium position but lost six championship points.

During qualifying earlier Saturday, Czaczyk came into the pits early during qualifications after taking fast lap midway through the 30-minute session. However, Kirkwood, Darren Keane, Das and Goodyear quickly moved ahead with better lap times.

“What may have looked like a mistake during qualification really worked out to my advantage,” Czaczyk said. “I was on pole when the red flag came out, and I thought I had a big enough gap to stay pitted when the green flag went out again. I think that made the difference for the race. I had fresher tires.”

During a three-day event weekend, teams are only issued eight Pirelli tires total to last the entire race weekend. Capping the tire count was designed to help keep costs low. When event weekends are shortened to two days, teams will receive six tires.

Kirkwood also had an impressive day. He took the pole after running a 1:27.169 fast lap. Just over a tenth of a second separated him from front row mate Keane. Keane was the fastest car out of practice Friday, but after a spin-out on the second lap that put him in last position to finish the first race 10th.

The F4 U.S. Championship inaugural race weekend will continue Sunday with two additional races. Keane will sit on the pole for the second race, while grid position for race two is determined by the best lap time finished during race one. Kirkwood will join him in the first row.

Fans can follow live timing and scoring on the Race Monitor app that can be downloaded for free in Google Play or the Apple App Store.